A shutdown in the name of BESSY VSR

For years, the researchers at HZB have been working intensively on upgrading the electron storage ring into a variable pulse length storage ring (BESSY VSR). Now things are becoming concrete: On 30 July BESSY II is switched off for ten weeks. Then the first modifications in the experiment hall are due to be carried out in order to realize BESSY VSR.

“We have four or five very tough but also very exciting years ahead of us,” project manager Andreas Jankowiak said upon BESSY VSR’s approval in June 2017. With these words, he hinted at the mountain of work the various teams at HZB are now facing. It’s not just the scientists who are entering uncharted territory, it’s everyone: technicians, engineers, builders and radiation protection experts alike are tasked with developing novel solutions in the realisation of BESSY VSR. 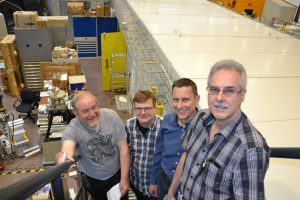 “BESSY VSR System Integration” is one work package, coordinated by the team of Roland Fleischhauer, Christian Jung, Gert Meyer and Ingo Müller. “Together with the entire project team, we are working out what prerequisites we have to create in the electron storage ring in order to perform the upgrade. BESSY VSR will involve a lot of structural modifications. It is a hugely complex matter,” says Jung, who brings out big flowchart. There are 13 organisational units (OU) circled in red on it. “We are in constant contact with these OUs. Our task is to talk with everyone involved, to find solutions and to plan concrete subprojects.”

It all starts in just now. On the 30th of July, BESSY II will be shut down for ten weeks. During this shutdown, the team will tackle the first tasks. The schedule is a tight one. Right on top of the list is the dismantling of the multipole wavelength shifter, the EDDI beamline and the radiation protection hutch. “We need this space to construct the cold supply for the superconducting cavities in the storage ring,” explains Ingo Müller, who is coordinating the shutdown process hand-in-hand with Christian Jung.

The high-current superconducting cavities are a key component to realising BESSY VSR. Keeping them cool will require an elaborate infrastructure, which will be built up in the experimental hall over the next two years. “We’re creating the necessary space for them this year. Then in 2019, where the EDDI beamline is now, we will build a 20-tonne, four-metre high cold box.” The superconducting cavities have to be cooled down to their operating temperature of -271 degrees Celsius (1.8 kelvins) using liquid helium. The helium will first be stored as a gas in tanks outside the experimental hall. Through an underground circuit, yet to be built, the helium will then flow into the cold box in the experimental hall. There, it will be liquefied and transported further through the hall to the cavities in the storage ring. Things will become really spectacular at the end of 2019: that is when the roof to the BESSY II experimental hall will have to be opened. The cold box is namely too large to fit through any of the doorways. “Unfortunately, there’s no hatch in the roof. So, the structural engineers and building experts are currently calculating how the hall roof can best be opened and closed as quickly as possible again,” says Müller. “There are no standard solutions for this.”

Further projects in shutdown: a diagnostic beamline for BESSY VSR and a new laboratory for solid-liquid interfaces

And there are yet more projects to be done during the summer shutdown, Jung explains. The colleagues from the Institute for Accelerator Physics are constructing a diagnostics beamline for BESSY VSR in the vicinity of the EMIL hutch. Furthermore, a laboratory for electrochemical experiments on solid-liquid boundary interfaces (BEIChem) will be built at BESSY II and will need access to the X-ray light. “Reconciling all these subprojects takes precise planning and logistics. And once the shutdown is over on the 26th of October, and the first users are waiting at the door, then everything has to run just like it did before,” Christian Jung says.