It was after a telephone call in 2003 that Manuela Klaus’s career took off. Right about the time Klaus had just graduated in materials sciences from TU Berlin, the phone rang in the office of Christoph Genzel of the Microstructure and Residual Stress Analysis department. “It was a drill bit manufacturing company from Baden-Württemberg calling,” the department head recollects. The callers needed help with improving their drill bits: they wanted to measure the residual stress of the material at the precise points where the bits are most stressed – “and I said there are no methods to do that yet. But I know of just the budding doctoral student who could develop one.”

So the deal was made. Manuela Klaus received a PhD position that was entirely funded by the Baden-Württemberg company – and in return the company received experimental data of a precision unprecedented for this specific problem. “I studied hundreds of samples for that,” Manuela Klaus says, looking back at her doctoral phase. It was to be the prelude to the research she is still pursuing today. Using synchrotron radiation from BESSY II and neutrons from the research reactor BER II, the 39-year-old researcher and her colleagues are studying the product characteristics of various materials and developing ever new methods and approaches to achieving the most accurate results possible – and to perform experiments that have never been technically feasible before.

Manuela Klaus sits in a conference room at the research centre in Adlershof, her long dark hair bound together into a ponytail. The team meeting has just finished. The colleagues from Adlershof and Wannsee have caught up on the usual matters they discuss at their ten o’clock Wednesday get-togethers: current projects, recent developments and new results. “We work closely together,” Manuela Klaus says after the meeting. Team spirit is important to her; one senses that immediately. On the table before her is a box she has placed there, still closed. Beside it is a model depicting how atoms are arranged inside a material. It is built in a cube shape out of many little balls joined together with thin rods. “Now, if I squeeze the material here,” she says, pushing her hand down onto the cube from above, “then the atoms are pressed closer together, while the material bulges out the sides.” She uses this model often when she needs to explain the subject of her research: residual stress. At this point, the department head Christoph Genzel happens to be walking by. He chips in: “Imagine an empty beer bottle. You can use it to hammer a nail into the wall; that’s how hard it is. But if you drop the nail in through the neck, it will smash out the base of the bottle. That’s residual stress.” 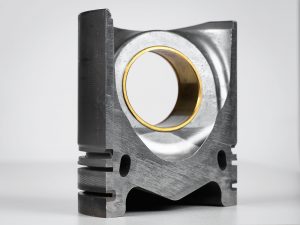 Residual stress is not just an academic concept, and hardly anyone knows this better than Mirko Boin. Manuela Klaus goes to fetch him from his office next door. Boin, who has a doctorate in materials science, is the industrial contact for the team. He opens the cardboard box on the conference table and takes out about a dozen metal parts. “These are projects we last worked on,” he explains. Part of a shaft from a car engine is in there, plus a cylinder head, and the tip of a drill bit. Car makers and suppliers, aerospace companies and enterprises from all kinds of industries who are looking for innovations come to Mirko Boin. Residual stress is often used as an indicator of the quality of a product. In elaborate experiments, attempts are made to harden materials so that highly stressed parts, in engines for example, can continue to function reliably over decades. “This here for example,” says Christoph Genzel, taking a thumb-sized tappet out of the box, “is a part from the auto industry; a ceramic material.” He picks up the tappet and drops it onto the floor. We hear a metallic-sounding clank, and see a grin on Genzel’s face, who knows most observers would have expected it to be in shards by now. He picks up the unscathed tappet again: “It’s been hardened to have a high residual compressive stress on the outside,” he says – and knows he could drop it several more times without anything breaking.

Additive manufacture is a hot topic in industry

“We are something like the general practitioners people come to with their ailments,” those in the Microstructure and Residual Stress Analysis department cheekily put it – and the fact is, there are plenty of patients. Sometimes they will be developing a new steel whose properties have to be precisely measured, and most recently there has been a lot of demand in so-called additive manufacture – a type of 3D printing out of metal – in which many industries are placing a lot of hope. “On average, we probably get one enquiry from industry a week,” Mirko Boin says. Sometimes, the customer needs one specific part to be tested (and soon, please); sometimes they will have more like 50 samples to be studied. And in so many cases, there are no existing testing methods for the specific task – much like the time when Manuela Klaus did her thesis. “All the tests we perform in our department are done on samples from customers, because we don’t make any parts ourselves,” Manuela Klaus says. By now, we have walked from the conference room to her team’s experimental station, which is called EDDI (Energy Dispersive Diffraction). Painted a striking shade of blue, it practically leaps out at the eye in the experimental hall of BESSY II. She is normally here two days a week, performing her experiments. The rest of the time she spends in her office, preparing for the next measurements and processing the data for the new experiments. “With some companies who come to us, the experts have a pretty good idea of what we do here,” says Manuela Klaus, “but we also get those who are only hearing about residual stress for the first time, from us.”

“The Partnership with industry goes hand-in-hand for us.”

What she and her team do is an example of how partnership with industry can also enrich research – “because that goes hand-in-hand for us,” as she puts it. All the time, they receive requests that involve a great deal of research before any testing can happen. But a lot of this research also results in articles in prestigious science journals. As one example, large-scale motor parts need to be tested at very specific points in order to determine their properties. “You can only really reach the test points if you saw the whole thing up, but then the material’s properties change,” the team knows all too well – and that is where their creativity comes in.

Right now, Manuela Klaus and her colleagues are feeling the winds of change: They can only continue working in the experimental cabin at BESSY II until next summer. So, two new pieces of laboratory equipment are currently being set up in Adlershof and Wannsee, based on new technology: these so-called MetalJet high flow X-ray sources will deliver hard X-ray light at a similar quality to that of BESSY II.

“But, of course, they’re already working on their next innovation.”

But there is one thing that will never change, and that is the number of enquiries for cooperation from industry. “In the beginning, we thought: once we have tested the new material, we won’t ever hear from that company again, because they will have got their results,” Manuela Klaus says with a smirk. “But, of course, they’re already working on their next innovation, and so it continues.” Even now, there is a new drill bit lying on her desk from the same Baden-Württemberg company for whom she developed the testing method for her doctorate – their cooperation has continued the whole time in the one and a half decades since.

2018-05-22
Previous Post: Solar cities: feasible but not yet realised
Next Post: With ERASMUS from Patras to Berlin: Nickie Messini works in the MX group for protein crystallography