Why Is Berlin a City With an AMAZING Public Transport ? 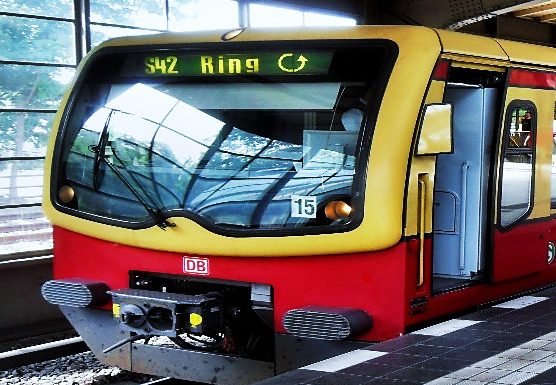 If you are reading this, there is around a  40 % chance that you have lived most of your life in a rural area. In my case, this is true, and you must know that, for that reason, I had never traveled neither by plane, train, or tram until the day I arrived in Berlin, in which I did it all at once.

Berlin has an astonishing public transport infrastructure, which could not amaze me more when I came to my first day of the HZB Summer Student Programme (2022). The whole transport network is the result of years of work of engineers, physicists, mathematicians, and many more. In this blog, you will learn some interesting ideas that scientists have developed, that give public transport the high quality it has today. You will find all sources in the bibliography.

Why are there stones along the railway tracks?

Should you have ever travelled by train or tram, you may have realised endless piles of stones below the railway tracks. Those piles form what is called track ballast. Their flat surfaces and sharp edges give the trackbed the resistance and stability needed to put up with all the weight of the train or tram, whose weight oscillates around values of 1 ton per meter of length of vehicle. The track ballast helps to distribute the stress towards the outside of the track, and thus prevent to compromise the status of the railroad sleepers. The track ballast absorbs a great deal of vibrations and undesired noises, which adds to the comfort of the passengers riding in the vehicle. You can test this the next time you ride in a tram: you will feel louder noise and higher vibrations in those sections without track ballast. And last, but not least, two of its most relevant tasks is to prevent the railroad from flooding, and therefore rusting rapidly, as well as to prevent the accumulation of vegetation around the track. Hence, despite how simple it seems, the track ballast could be considered as a masterpiece of engineering.

How do displays in buses know when to show the next stop?

This is something I really think about very often. I used to think that there was a button in the driver cabin to change the stop name in the LED screen after every departure. This is, nevertheless, far from reality. The modern bus tracking systems can now make use of software applications including GPS, wheel position monitoring (for known routes), Bluetooth communication at stops, or even the mobile devices that people use to scan QR codes when getting on and off the bus. All the vehicles in a bus line (this is also true for trams and trains) are in continuous communication with a central server, which can provide the users with real time information about the times of arrival. To my mind, this is, undoubtedly, another proof that we live in a modern, fully electronic society.

Have you ever considered how is it possible to have a tram coming to your stop every 7 or 8 minutes, or a train every 10-12 minutes, even though lines are so long? It is just a matter of numbers. The BVG’s (the Berlin’s public transport company) fleet is composed of a total of 1500 buses in around 120 lines, 600 trams in 22 lines and 690 trains in 16 lines. This means that, on average, if every vehicle was operating, there would be more than 10 buses, 25 trams and 40 trains per line in Berlin. The number of operating vehicles depends, of course, in the number of people using the public transport, which reached a peak right before the pandemic. One of the reasons why having so many vehicles is possible is because the annual revenue of the public transportation of Berlin reaches up to 1.300 million euros, an amount to which every Berlin citizen using the public transport contributes.

Considering all this information and the fact that this is only the tip of the iceberg will perhaps help you see not only the Berlin’s public transport system, but every other through different eyes. You cannot imagine how lucky you are that you can get anywhere in Berlin using public transport and also (nearly) always find a seat.

Jorge Torre Ordás is a Materials Physicist who got his Master in Physics in the University of Valladolid (Spain). During the HZB Summer Student Programme (2022) he is working on precision FTIR spectroscopy in the Infrared Beamline IRIS of BESSY II.

Information about the track ballast:

Information about the design and number of vehicles:

The art of patience in science or what am I doing here?
Do you know what a quantum dot is?
Spectroscopy as an ultimate tool for studying matter
My Journey Through the Language of Research