By: Vladislav A.
In: Energymaterials, International, Summerstudents
Tagged: solar cells

OK, here we are. My name is Vlad. I’m a summer student from Moscow and the author of this note concurrently.  If you are reading this post, I bet 90% you was interested in the title. But I suggest to talk about it a bit later.

Just for the beginning , everything you need to know about solar cells is that they consist of silicon. The second point is that the first one was a lie. In fact, not only silicon is used in solar cells. Since the moment people decided to use solar cells as a real source of energy, scientists have been working on additives aimed to improve power efficiency of silicon solar cells. As a result, special organic molecules called singlet fission materials (for simplicity SF-materials) has been proposed to play the role of savers of Si solar panels.

To understand processes inside a solar cell, just imagine a very stupid or probably broken machine . The rules are quite simple. This machine gives you an apple for 1 euro coin. You also can give this machine 2 euro coin, but you would still get only 1 apple. In the same way, the Sun gives “1 and 2 euro coins” to a solar cell, but we can get only 1 “apple” per coin. So the regular question is which way we can get a double apple from 2 euro coin. Fortunately, we can answer this question — SF-materials. What these materials do is to split 2 euro coin into two 1 euro coins, after that we transfer these splitted coins to our machine and get 2 apples from a single 2 euro coin instead of one. Sounds good, isn’t it?

Why does my project exist? 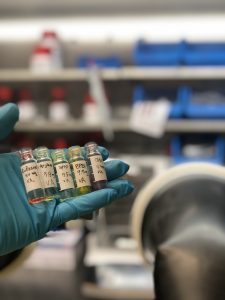 According to the previous paragraph, solar cells problems seem to be solved, but the point is that our “splitted coins” (we call it triplets) don’t live too long. In the same time, triplets need some time to travel  from their birthplace in the bulk of SF-material to a solar cell. Thus the longer they live, the greater yield we have. Here I have to notice that almost all crystal properties are determined by its geometry and triplet lifetime is not an exception. The simplest example is the difference between diamond and graphite. It’s hard to believe that they consist of same atoms — carbons. 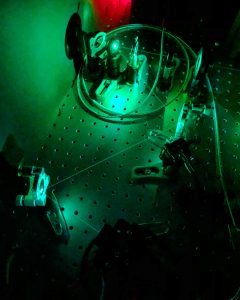 Generally that is the reason we try to grow different organic structures and study its behavior in the presence of silicon, especially its lifetime. But firstly we have to characterize crystals: optical microscopy is used to look at the crystal shape, atomic force microscopy to check crystal profile and finally confocal laser scanning microscopy to get an idea about molecular density inside the crystal. The principle of the last one is simple: laser beam scans the surface of your sample point by point to get the whole image whereas optical microscopes get the whole image at once. But what unites them is that pictures are able to impress anyone. By the way, the front picture is an image of one of my samples obtained by an optical microscope.

The last and the most interesting thing I’d like to tell you is designing samples. We use glovebox with N2 inside to prevent the effect of oxygen on organics. Can you imagine, that you have to work with a tiny sample using 3 layers of gloves one of them being fixed? I can already. That’s not a big deal until you need to adjust your glasses. Certainly I was told that I would have to solve problems, but this kind was unexpected.

One week for four problems – 2022 Hackathon@HZB
PhD student Denis Antipin about a successful trio: science, sport and music
#LightSourceSelfie - video testimonials from all over the world
Head-on breakthrough in an unfamiliar environment