“Water to heat water!” “That I should like to see.”

During one of the winter nights, while talking in the interior of Granite House, “well lighted with candles, well warmed with coal, after a good dinner”, the settlers of Jules Verne’s Mysterious Island were discussing about the fact that the coal will be entirely consumed. After a roughly estimation, Cyrus Harding, an engineer of great capabilities, concluded that it would happen “for at least two hundred and fifty or three hundred years.” To everyone’s surprise, when he was asked what they will burn instead of coal, he said: “Water”.

“Water” cried Pencroft, “water as a fuel for steamers and engines! water to heat water!”

“Yes, my friends”  resumed Harding, “I believe that water will one day be employed as fuel, that hydrogen and oxygen which constitute it, used singly or together, will furnish an inexhaustible source of heat and light, of an intensity of which coal is not capable. Some day the coal-rooms of steamers and the tenders of locomotives will, instead of coal, be stored with these two condensed gases, which will burn in the furnaces with enormous caloric power. There is, therefore, nothing to fear. As long as the earth is inhabited it will supply the wants of its inhabitants, and there will be no want of either light or heat as long as the production of vegetable, mineral or animal kingdoms do not fail us. I believe, that when the deposits of coal are exhausted, we shall heat and warm ourselves with water. Water will be the coal of the future.”

To which a thoughtful fellow replied; “That I should like to see.”

Having read this famous novel increased my expectations for the Summer Student Programme at the Institute of Solar Fuels, one of the divisions of the Helmholtz-Zentum Berlin für Materialien und Energie. Not only is the novel widely regarded as a masterpiece, but also, it is about chemistry. Although it was written in 1875, it was clear to the author that some of the current sources of energy would be eventually exhausted. Moreover, he pointed about the potential applications of hydrogen as a solar fuel. Since water is the most abundant source of hydrogen in the Earth, scientists have developed several methods, namely electrolysis, photoelectrolysis, thermochemical, among others, to produce it out of the water. At the Institute of Solar Fuels, new materials are being studied in order to include them into the so called “artificial leaf” whose working mechanism is that of a photolectrochemical cell.  Photo-anode semiconductor bismuth vanadate (BiVO4) is especially understood to have shown the better performance among all the metal-oxide materials for water oxidation. Since the latter is a charge transfer process, it could be accelerated by means of a catalyst that covers the semiconductor material.

Several thicknesses layers of the catalyst manganese oxide have been deposited over BiVO4 samples to study the charge transfer process in both the interfaces catalyst/semiconductor and catalyst/electrolyte. The samples are particularly characterised by Time-Resolved Microwave Conductivity (TRMC). Through this method it is possible to measure the mobility of the charge carriers and its lifetime  both on the surface and in the bulk. As conventional conductivity techniques are hampered by the need to apply electrical contacts, microwave conductivity measurements are performed by laser pulses of different wavelengths. During the whole process the sample is inside a microwave wave-guide with the appropriate dimensions. 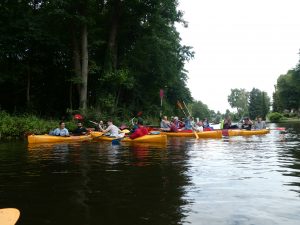 Every year the Institute for Solar Fuels (EE-IF) takes its students and professors on an outing to somewhere in Berlin. This summer they decided to go to a region in the east of Berlin and row boats. Even thought I was new to the institute, they invited me and my summer colleagues to attend the lake. We had the opportunity to meet them in a completely different environment from the academic one. The outing was completed after a lunch in which we enjoyed ourselves trying to guess famous characters from all over the world by means of mimicking.

As a curious student I have attended the Deutsches Technik Museum with some of my program colleagues. In the new building lies the Science Centre Spectrum. I had this photograph taken in the temporal exposition of Sugar. The wall behind me graphically explains the natural photosynthesis plants do to produce glucose (the venue’s theme). The process which takes place in the natural plants leafs contrasts with the artificial one towards which the EE-IF’s researches are oriented to. As a mater of fact, I have found a video from the HZB Youtube Channel to get an overall picture of the Solar Fuels research at HZB. Although it is in German, you can enjoy it.

To reply the to Pencroft’s comment: “That I should like to see”, we can say: “so would many of us.” From Jules Verne’s prediction it is astonishing to think that the idea behind the photoelectrochemical fuel cells has borne in the mind of the scientists through a famous paper written by G. Ciamician in 1912. One of its most remarkable phrases is: “Is fossil solar energy the only one that may be used in modern life and civilization? That is the question.”

Simulating and Discovering
Head-on breakthrough in an unfamiliar environment
Before leaving Berlin, let me tell you a story
Life Beyond Fears