Do you know what a quantum dot is?

By: Vladislav G.
In: International, Summerstudents

If you imagine an atom being of the size of a cherry then a quantum dot (QD) is a watermelon. Although it is much bigger than an atom, a QD is still a small object, nanometers long, and it preserves atomic features. One of them is a discrete energy spectrum. For this reason, many people address QDs as „artificial atoms“. 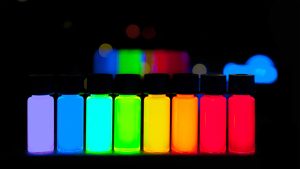 The great thing about QDs is that you can design your own „atom“ giving it specific features you want and make it in a lab. Two major ways to produce them are: you either grow a crystal or use a colloidal synthesis to make a large macromolecule. As for features of QDs, for example, a spectrum of a QD drastically depends on its size. As a result of tuning the size, you obtain QD that emits light of a specific color. Look at the image where different size QDs glow in different colors: from blue up to red. One of the many applications of this feature is that you can make a QD TV screen (aka QLED). How cool is that? Actually, Samsung has been already doing it for two years.

QDs have a broad area of application. They are used in Quantum Computers as containers for qbits. Designing Solar Cells with QDs may increase its efficiency. In Biology QDs serve as markers to probe different living materials.

So, answering the question in the title: QD is not a name for something unique, it can be a macromolecule or tiny piece of a semiconductor. It is a collective name for rather small macro-objects that possess atomic features.

In my summer project, I look at a specific ultrafast energy transfer process that happens between two QDs. This process is called inter-Coulombic decay (ICD, for short). Don‘t be afraid of the name. In fact, it is quite simple to describe the process. In a nutshell, it works like this:

1) Take two QDs with one electron each.

2) Excite one electron, say the left one.

3) The excited electron will jump to its ground state at some point and the energy difference will be transferred via the Coulomb interaction to the electron in the right QD.

4) This electron on the right will have to go to a new energy state which, in this scenario, lays in the continuum.

In other words, the electron will just fly away and leave the system. That is an ICD process.

I work with these two QDs and using numerical simulation investigate how the ICD process depends on a geometry of the system and the form of potential between QDs. More specifically, I look at how fast the process is, the energy levels structure and in which direction the ICD electron will fly away, and how these quantities depend on parameters of the system.

Users at BESSY II: Nafion, the talented membrane for fuel cells and 4D-printing
In Memoriam of Vera Adamchuk - Bronze relief reminds on the scientist who cofounded the Russian Germ...
Working with neural networks: what does that look like?
Organising an online workshop - and - Looking forward to meet again