Back at the beamline: Ana Guilherme Buzanich and Franziska Emmerling from BAM

Today we present two researchers working on the BAMline and µSpot Beamline at BESSY II. Franziska Emmerling is responsible for the Materials Chemistry Department at BAM and heads a large team for structural analysis. Together with her colleague Ana Guilherme Buzanich, she will report on how they experienced the lockdown and are now carrying out their first experiments again.

How did the lockdown start for you? Did you have to interrupt an experiment?

Franziska: No, we were lucky, our beam time had just ended and we had tons of data that we had to evaluate anyway. I wrote an email to everyone on March 16th as leader of the team with the message: ‘Prepare to work from home’. And then I made sure that everyone could work from home. We agreed on tasks and projects and made plans until Easter.

Ana: At first we thought that the lockdown would only last until Easter. And we all had enough to do with the evaluation of the data.

Franziska: From March 17th, really everybody was at home, except for a few people who had to do something on the instruments. That was very reassuring for me, because I knew: We are all safe now. And then we already started to have online meetings. And when I saw everyone on the screen, it was great.

Ana: We have organized a lot of online meetings, also completely new formats were created. For example, a researcher from the British synchrotron Diamond Light Source, who is visiting us here, started a series of lectures on methods of X-ray small-angle scattering together with other colleagues, always on Friday afternoons, under the title “The Light Stuff”.

Franziska: It was great to go into the weekend with such input. But that went even further. Some members of the team met in the evening to play virtual cards. Or for a glass of wine. But we also celebrated together online when we had finished a paper together and could send it off.

And then, in June you could return to your beamline on BESSY II? Was it very unusual to work with the new security guidelines?

Ana: At first I found it quite challenging to always pay attention to the safety distance.  You sometimes forget it when you work together on one experiment. But I got used to the mask very quickly, everybody wears it on BESSY II now, which is very comforting.

Franziska: A big change is of course that we are only allowed to work in pairs, but in the meantime I think that this rule is not so bad. Because the beamtime requires a shift operation anyway to cover 24 hours. You just have to plan and make sure that people get all the information from the next shift. In return, you can work with two people very concentrated, nobody is standing around…

What might change in research through these experiences with online tools in the Corona era?

Ana: A lot of things work better online than expected, and some even better than in real meetings: for example, we can work together on documents, which is very efficient. I could even imagine that the scientific exchange will become even more intensive. It’s so easy to join a conference with just one click. You don’t have to go to the USA or wherever, just for a lecture.

Franziska: Yes, exactly. I have now led a session at a conference in India. I had to be at the screen at 5 a.m., but I didn’t have to fly there. And in my experience, other scientific meetings also benefit from the fact that they are now held online. The number of participants is even higher than before.

Ana: That’s right, we can see that also in the seminars for BAM PhD students. Since these seminars have been held online, other interested scientists from BAM have also joined them. This enables us to have a greater exchange of ideas.

Franziska: We will certainly continue to use online formats. And yet, when I was back in the office the other day, a colleague came up to me beaming and said: “It is so nice to meet people again”. We need that too. 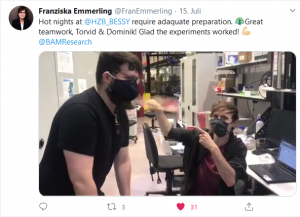 Both scientists are active on Twitter and report about their lives in science. You can follow @FranEmmerling and @ABuzanich 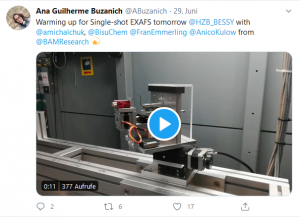 #BESSYBeamlineScientists: Dr. Annette Pietzsch and UE112 PGM-1
We are back: Rowshanak Irani from the Solar Fuels Institute
The art of patience in science or what am I doing here?
#BESSYbeamlinePortraits: Götz Schuck and the KMC-2 /KMC-3 beamline